It's a Small World After All

Lately, I've been noticing the smaller things in life. Literally. It seems that the smaller the item, the bigger it becomes!  The reality is that art has become a world where even the tiniest details get noticed. 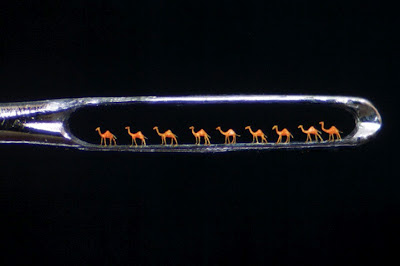 Take for instance these mini-sculptures by Willard Wigan. They are the world's smallest micro-sculpture. They are so tiny that it takes a microscope to even recognize them.  And you see that silver frame? That's the eye of a needle.  Impressive, right?  It is such a beautiful art that requires lots of talent, patience and precision. 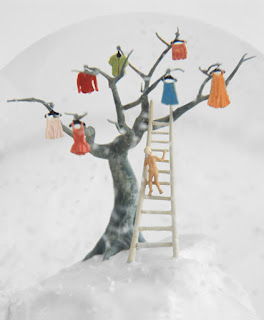 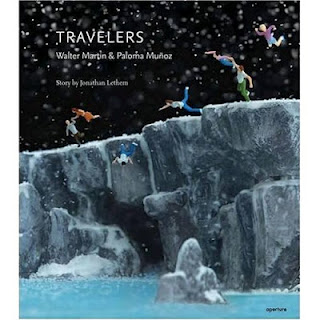 And what about the "Travelers" by Walter Martin & Paloma Munoz? They've created entire scenes built into snow globes. It's surreal to see these life-like habitations in such small forms. It almost feels voyeuristic, in a way.  Others have followed suit with miniatures, such as "Microworlds" by Margherita Dessanay.

This small-scale art has now expanded to film, with the popular film "Marwencol."  It's a documentary created about the fantasy world of Mark Hogancamp.  After having been beaten into a coma, Mark uses 1/6th scale World War II era town in his backyard.  Through his story-telling and art, it helps him recover his memories as well as his physical coordination.  You can also catch stills of the piece on the Marwencol site.


If that's a little too deep, there are other options. You can delve into the life of Marcel the Shell. He takes us through what he uses for skis, what he really wants, and how "lint is a shell's best friend." 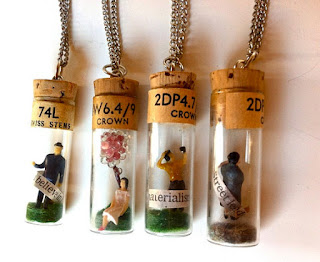 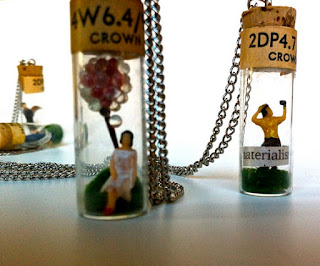 So, I have decided to take my own spin on the miniature trend and create these miniature vial necklaces, each a unique mini conversation piece.
One has to wonder: What do these tiny people DO all day?...Stuck in a bottle with only a small tree to lean on or a line from the newspaper to read.  And one must also wonder about the crazy person (ME!) who painstakingly put these little itty, bitty parts in place to form these necklaces... each created from a cork-topped, vintage glass vial that was originally used to house watch parts.
If you'd like one of your very own to observe you can order from me at http://www.pauletta.etsy.com
Thus, begging the ultimate life question: Do you wish to live under the magnifier, or above it?
Let me hear from you.
Posted by Pauletta at 10:25 AM

What an exquisite take on the world... inviting us to take notice of the details instead of the "big picture." My mother had a fascination with miniatures.. especially those from the far east... it is a way to become more sensitized and attuned to the essence of things, I think. Thank you for helping us stay observant... and for your beautiful contribution to the aesthetic world.