Traditionally known as All Hallow's Eve, Halloween is the tradition of when the living and dead meet. The closely associated Day of the Dead, celebrated on November 1 in Mexico, Spain, and Brazil, is a time for families to meet and pray over their late relatives. Despite the differences in origin, both Halloween and Dia de los Muertos share a lot of graphic imagery (skulls, death), traditions (dressing up, offering gifts), and indulging in food.

No matter what you call it, it's a time for being scared, reveling in sugar, and for dressing up in something 'costume-y'. Blending Howlite replicas of traditional sugar skulls and minerals such as Fluorite and Turquoise, I drew inspiration to create my own collection for the holiday. Think less macabre and more marvelous. 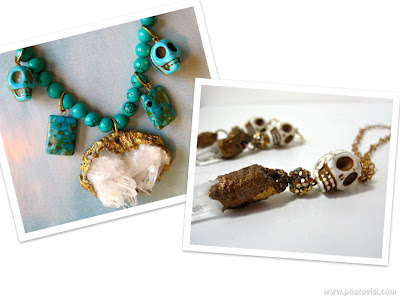 Turquoise and quartz skull necklaces (here ), perfect for an ethnic look for celebrations. 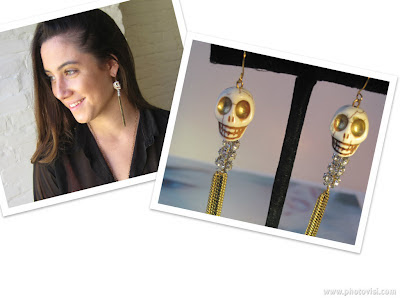 (Above) The Spooky "Skeletons in my Closet" Tassel Earrings are a great fit for a night out if you want to add some personality to your outfit or maybe if you just don't want to dress up for Halloween! 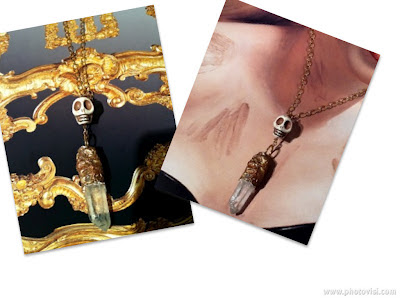 For the holidays, I thought it would be fun to put a twist on my traditional pyrite quartz necklaces. 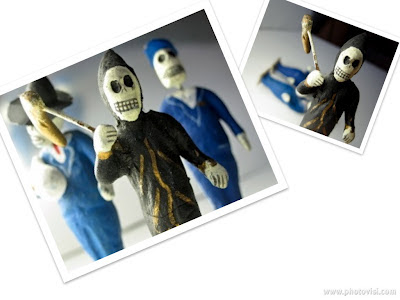 ﻿Day of the Dead figurines, known as calacas. Shown in more of a Guatemalan tradition, they are meant to represent death itself and a fear of death.  Did you know this seemingly dark trend actually came from something sweet? Sugar skulls are actually constructed from boiled sugar, which is then molded into eerie skulls, as seen below. Now it makes sense why the typical American celebration of Halloween includes so much candy!


Can you believe how intricate this work is and that it's actually made of something as simple as sugar?

It's inspiring to see how a cultural holiday can turn into a global phenomenom and employ art in all forms.  Below, is a painting by David Lozeau, a sand sculpture commenting on Occupy Wall Street, and a traditional altar shown in a museum.

How do you plan on spending your Halloween?